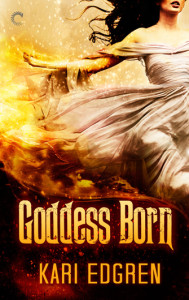 Descended from the Celtic goddess Brigid, Selah Kilbrid is bound by immortal law to serve humankind. But as the last Goddess Born in the New World, she must conceal her power to heal or risk being charged as a witch. For eighteen years, Selah safely navigates the narrow gap between duty and self-preservation — until the day a prominent minister uncovers her secret. Already tempted by her large estate, he soon covets her power and demands marriage in exchange for his silence.

Terrified, Selah flees to Philadelphia where she strikes a deal with an arrogant stranger. It doesn’t matter that she suspects Henry Alan harbors his own dark secrets. Once he agrees to the scheme, Selah refuses to look back. But as unseen forces move against her, she’s unsure which poses the greater danger—a malignant shadow closing in from outside or the fire that threatens to consume her heart.

“Set in the colony of Pennsylvania in 1730, this riveting novel begins as 18-year-old Selah Kilbrid runs into Quaker minister Nathan Crowley, a man who “labor[ed] under the delusion that [Selah] would soon be his wife” despite the fact that she was betrothed to a man on his way to America from Ireland.. The characters are well developed and relatable; the reader empathizes with Selah and her plight. The fast-paced plot is exciting and keeps the reader guessing and in suspense. The end leaves room for a sequel, which, after such a tremendous beginning, would be anxiously awaited. A clear winner!” Publisher Weekly

“If you are a fan of Diana Gabaldon’s Outlander series, then you will like this book.” The True Book Addict

“…Mystery, danger, and best of all a large helping of romance.” Unabridged Bookself

“Goddess Born… blends mythology, mystery, and romance into one fantastic read.” I’d So Rather Be Reading

“Positively brilliant… the sheer amount of twists had me eagerly turning pages and my emotions on high alert.” Sassy Savvy Fabulous

“Believe me, Mr. Alan, marrying you was truly my last option. Why else would I willingly connect myself to a servant when half of the single men in Hopewell wanted my hand?” Well, maybe not half, but I wasn’t really going for accuracy at the moment.
“Then why didn’t you take one of them instead?” he asked, giving me a sardonic grin.
“That is none of your concern.” I lifted my chin, but he was so tall my nose barely topped his sternum, taking away from my attempt at a dignified air. “You are making such a fuss, I almost wonder if you would have preferred Mr. Fletcher’s company to my own.” I smirked at him, pleased with the insult.
The elegant curve of his mouth tensed in warning, but I was not about to back down after being so rudely insulted. It was high time he remembered who was an heiress to a great fortune and who had arrived a day before, indentured for service with nothing more than the clothes on his back. Undesirable, indeed!
“Was it him you wanted instead of me?” I asked, pushing a little bit further.
His green eyes flashed dangerously as he leaned over me, bringing us almost nose to nose. “A wife should never doubt her husband’s natural desires,” he said menacingly.
Disconcerted by his closeness, I started to move away when he grabbed my upper arms and pulled me hard against him. Inhaling sharply, my rational mind scattered beneath the heady scent of soap and masculine spice. Without thinking, I drew another breath, and my eyes strayed to his mouth.
A soft chuckle vibrated deep in his chest. “So that’s why you’re angry.”
I jerked my gaze upward. “What do you—”
His fingers tightened on my arms. Then, with a dip of his head, he pressed his mouth to mine. The suddenness so startled me, I forgot to kick and scream until his hold slackened a moment later.
The floor felt strangely off-kilter as I stumbled back a step. My eyes blinked open, and Henry loomed large, looking angrier than before.
“Are you satisfied now?” he asked in a chillingly quiet voice.
Indignation roared to life inside me. “How dare you!” I cried, my hand rising in retaliation.
His reflexes were snakelike, and he caught my wrist in midair. “There’s no need for that,” he said, guiding my hand back down. “A bride is promised one kiss on her wedding day, but ask as you may, you’ll be getting no more from me.”